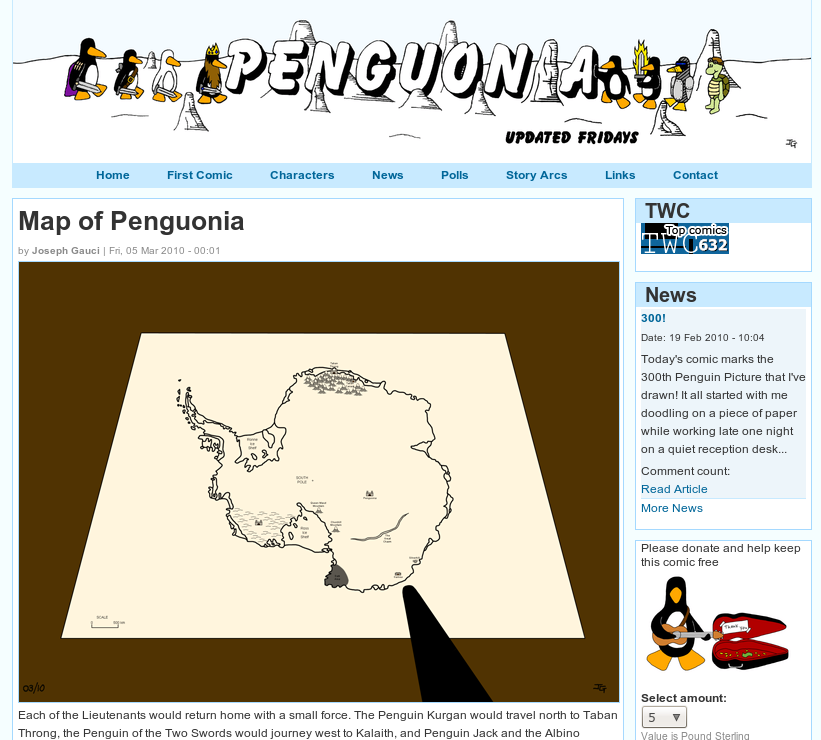 A friend of mine draws a comic which is about what can best be described as medieval penguins.

He asked me how difficult it would be to create a website so I put together this Drupal based site with a clean and simple custom theme.

Initially this was a straight forward script for publishing online comics, but as the needs of the client increased I had to move to something more substantial and Drupal, as usual, fit the bill. I still maintain and host the site as before.

A comic is essentially just an Image node with the associated comic and it uses the book module to create a sort of hierarchy of comics. This allows us to have each story line as a chapter of the larger book of Penguonia. It was organised that way to allow easier navigation of old story lines and a clear hierarchy.

In consultation with the client we created the custom theme, based on zen, and created all the graphics used. My preference, as always, is to keep these sorts of layouts clean so as not to detract from the content and after much tooing and froeing about colours and placement of certain screen elements, we came up with something we are both happy with.

The upgrade to Drupal has provided much more flexibility to the client and he’s been asking me questions about how it all fits together so he can add content himself, saving him the wait while I find the time to make trivial changes and giving him control of his own website.